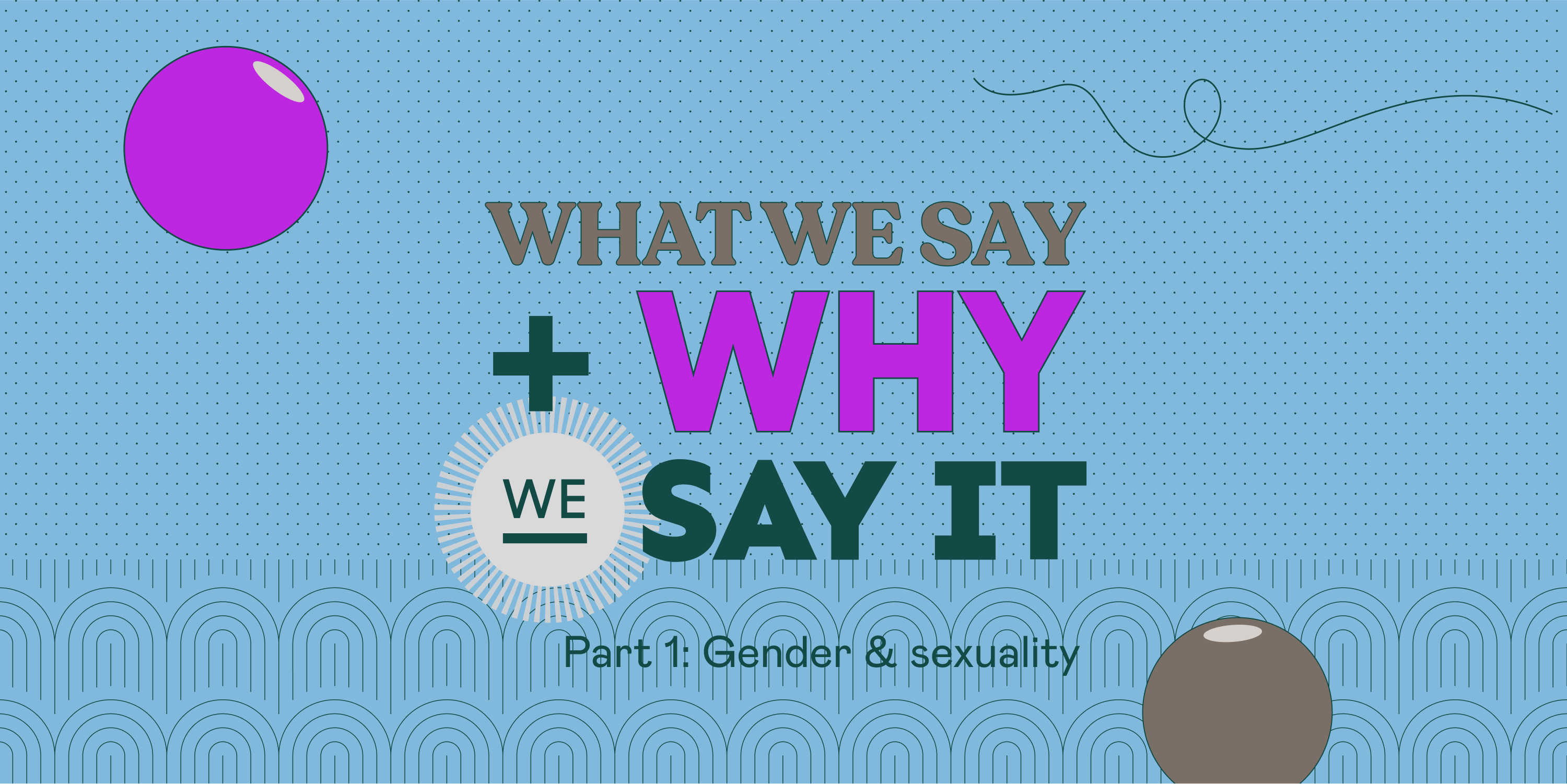 How we refer to our gender & sexuality matters.

“Sticks and stones may break my bones, but words will never hurt me.”

We’ve all heard this adage, but we also all know that this couldn’t be further from the truth. Words actually do carry weight. The language we use has a tremendous impact on not only the folks we use it with, but also on our own internal perspective and bias.

As such, it’s vitally important to use inclusive and affirming language, but as culture and technology evolve exponentially fast, so does language.

To stay consistent, Violet uses an internal guide that we maintain out of consensus as a company and with external thought partners.

During Pride month, we want to be transparent and offer up the first part of our guide as it relates to sexuality- and gender-related terms. We will continue publishing more parts of our guide throughout the year.

Remember: Every term or word comes nuanced with history, context, and personal preference. If you aren’t sure how someone may identify or what language may be appropriate, just ask! The primary thing to remember is, there’s always room for growth and learning. Cultural competence is not static; it is a lifelong journey.

Sex assignment (sometimes known as gender assignment) is the sex/gender one is considered to be prior to (i.e. obstetric ultrasonography) or at the time of birth based on a cursory examination of external genitalia.

Refers to non-surgical and surgical procedures that may be included in part of someone’s transition. Violet does not use: “sex change operation”, “gender reassignment/realignment surgery” (gender is not changed due to surgery), “gender confirmation/confirming surgery” (genitalia do not confirm gender), and “sex reassignment/realignment surgery” (as it insinuates a single surgery is required to transition along with sex being an ambiguous term).

The social construction of concepts such as masculinity and femininity in a specific culture in time. It involves gender assignment (the gender designation of someone at birth), gender roles (the expectations imposed on someone based on their gender), gender attribution (how others perceive someone’s gender), and gender identity (how someone defines their own gender). Fundamentally different from the sex one is assigned at birth.

One’s internal, personal sense of their own gender. Since gender is a social construct, an individual may have a self perception of their gender that is different or the same as their assigned gender or sex at birth. Gender identity is an internalized realization of one’s gender and may not be manifested in their outward appearance (gender expression) or their place in society (gender role). It is important to note that an individual’s gender identity is completely separate from their sexual orientation or sexual preference.

A term coined by law professor Kimberlé Crenshaw in the 1980s to describe the way that multiple systems of oppression interact in the lives of those with multiple identities.  Intersectionality looks at the relationships between multiple identities and allows us to analyze social problems more fully, shape more effective interventions, and promote more inclusive advocacy amongst communities.

Adjective used to describe the experience of naturally developing primary or secondary sex characteristics that do not fit neatly into society’s definitions of the gender binary. Intersex is an umbrella term and there are around 20+ (that we know of) variations of intersex that are included in this umbrella term. Violet chooses to capitalize Intersex.

This acronym stands for Lesbian, Gay, Bisexual, Transgender, Queer, Intersex, Asexual, and more. It’s important to note that Violet’s benchmarking framework addresses LGBQ and TGNC communities separately, however, often in blog posts or more, we use LGBTQIA+ as an umbrella term.

A medically-constructed categorization. Sex is often assigned based on the appearance of the genitalia, either in ultrasound or at birth.

The nature of an individual’s physical, romantic, emotional and/or spiritual attraction to another person. Gender identity and sexual orientation are not the same. Transgender and gender-variant people may identify with any sexual orientation, and their sexual orientation may or may not change before, during or after gender transition.

This acronym stands for Queer and Transgender People of Color. Violet chooses to use this umbrella term when the context needs to highlight race as a factor in the LGBTQIA+ community.

This acronym stands for Sexual Orientation and Gender Identity.

This acronym stands for Transgender and Non-Conforming. These communities are specifically centered around gender, gender identity, and gender representation. In health care, it’s important to note that care for these communities look very different and have very specific needs.

Notes on this guide:

Thank you. You are now on the list.
Oops! Something went wrong while submitting the form.