‍
Dr. Redmon decided to use The Cultural Formulation Interview (CFI) to better understand Mr. Parson’s presenting concerns after taking a mental health intake course. Since taking the course, Dr. Redmon has been dedicated to being more culturally responsive in his clinical practice.

‍
After asking some of his standard intake questions, Dr. Redmon starts with Domain 1 of the CFI which focuses on the cultural definition of the problem. Initially, Mr. Parsons reported that he sought treatment for depression.

‍
As a follow-up question, Dr. Redmon asked the following question, “What troubles you most about your problem?” Mr. Parsons noted that he felt “stuck” and “unmotivated.”

‍
Dr. Redmon asked the following questions from the CFI: “Sometimes people have different ways of describing their problem to family, friends, or others in their community. How would you describe your problem to them.” Mr. Parsons said, “it just feels like someone’s after me, like they got something over me and I just can’t move forward.”

‍
Dr. Redmon encouraged Mr. Parsons to discuss his thoughts and feelings about the fact that he feels like someone is after him.

‍
Dr. Redmon followed up with a CFI question from Domain 2: “Why do you think this is happening to you.” Mr. Parsons said, “I think this is punishment for not being as diligent with practicing my religion and paying my tithes. You know doc, if you don’t protect yourself and give something to God, people can get in there and put roots on you. In my religion, you must stay prayed up and protected. I haven’t really been doing that. I think that’s why I am so depressed. I practice Santería and sometimes it feels like someone cursed me.”

Using the CFI helped Dr. Redmon obtain a more nuanced understanding of what Mr. Parsons believed was the cause of his presenting concern. In doing so, he learned a great deal about the cultural values and the social identities that inform Mr. Parsons’ worldview.

Mr. Parsons believed that someone had placed “roots” on him. “Putting a root on someone” involves belief in the supernatural, and the conduct of rituals that are seen to harm or control another person. The concept of “roots” appears to be a part of Mr. Parson’s worldview and provides a culturally relevant understanding of his distress. Instead of discussing behavioral activation to manage depression or conceptualizing Mr. Parsons report of “roots” as paranoia or psychosis, Dr. Redmon opted to select questions from the CFI that would help me to better understand Mr. Parson’s point of view and ways to work with his beliefs.

Question to think about:

Can you identify one client that you are scheduled to meet with that would benefit from a more culturally responsive intake session? 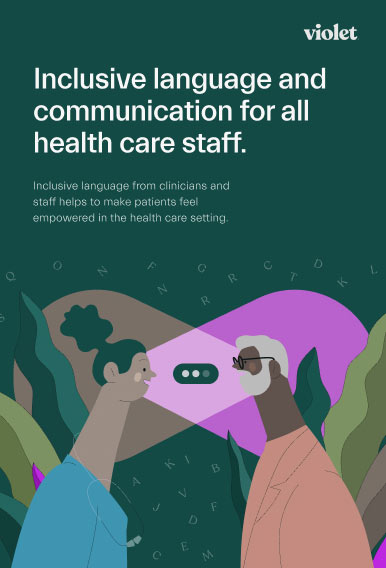 Subscribe to Violet’s newsletter and receive our free inclusive language and communication guide.